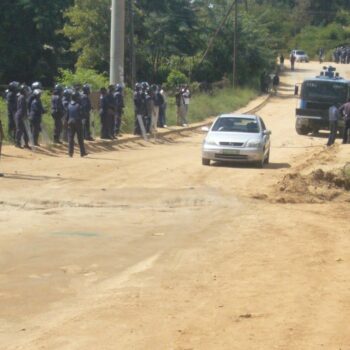 Eswatini authorities have escalated their crackdown on human rights, continuing their assault on human rights, the rule of law and justice. The government often uses force to quash opposition and dissent to suppress dissent and legitimate concerns of the people.

On Friday, 23 September 2022, the Times of Eswatini reported a physically violent attack on two members of parliament detained on charges of contravening the Sedition and Subversive Activities Act and Suppression of Terrorism Act by members of the prison security forces. The MPs were woken by blows of fists and batons from the assailants. When fellow inmates, waking up to the chaos, tried to intervene, they were also assaulted.

The attack on the members of parliament, which happened in the early hours of Thursday, 22 September 2022, comes days after the house belonging to the People’s Democratic Movement, PUDEMO, president Mlungisi Makhanya was damaged from an attack with military-grade explosives in what might have been an assassination attempt.

Within the same week, the country’s leading trade union, the Trade Union Congress of Swaziland, TUCOSWA, was denied a permit to hold a constitutionally protected protest march with demands including the review of the Free Primary Education and the Orphaned and Vulnerable Children’s Grant scheme.

This coordinated assault on the fundamental rights and freedoms enshrined in the country’s Constitution, the Commonwealth Charter, the African Charter on Human and Peoples’ Rights, the Universal Declaration of Human Rights, and numerous treaties and conventions that eSwatini is a party to symbolizes the government’s latest efforts to suppress human rights.

The Eswatini government has demonstrated commitment to silencing dissent through force over the years. In what increasingly seems like a state-sanctioned assault on human rights, justice and the rule of law, the situation in Eswatini has deteriorated recently. The Southern Africa Development Community, SADC, the Commonwealth Secretariat, the African Union, and the United Nations must condemn the onslaught on fundamental rights and freedoms in Eswatini.

SALC and Amnesty International are calling for the following measures to address the human rights decline in Eswatini;

In July 2021, Eswatini saw one of its bloodiest protest actions. The country’s Human Rights Commission reports about 46 people who died, while Amnesty International reported almost twice the official government figures. What started as a call for political reforms, through the delivery of petitions to members of parliament in their respective constituencies, was met with force and brutality at the instruction of the country’s leadership. Firstly, the Speaker of Parliament suggested it was ‘unSwazi’ to have petitions delivered. The then-acting Prime Minister ordered a stop to all petitions and unleashed the armed forces on the citizens.

In May 2021, a student was killed mysteriously at the hands of the police, which created a more peculiar situation as students demanded an explanation from the police. At the time, SALC raised the alarm about the human rights violations, noting the background to the political upheaval in Eswatini dating back to the King’s Decree of 1973.

By the end of July 2021, three Members of Parliament were announced to be wanted by the police for calling for democracy and political reforms. Two were arrested, and one has been in hiding ever since. Mduduzi Bacede Mabuza and Mthandeni Dube have been incarcerated since with bail denied by the Supreme Court.

The country continues to experience sporadic violent attacks on businesses linked to the monarch and armed security personnel in retaliation for the killing and maiming of political activists. SALC and Amnesty International have raised concerns about the deteriorating state of human rights and the lack of protection for the same in such a tumultuous time in the kingdom’s history.