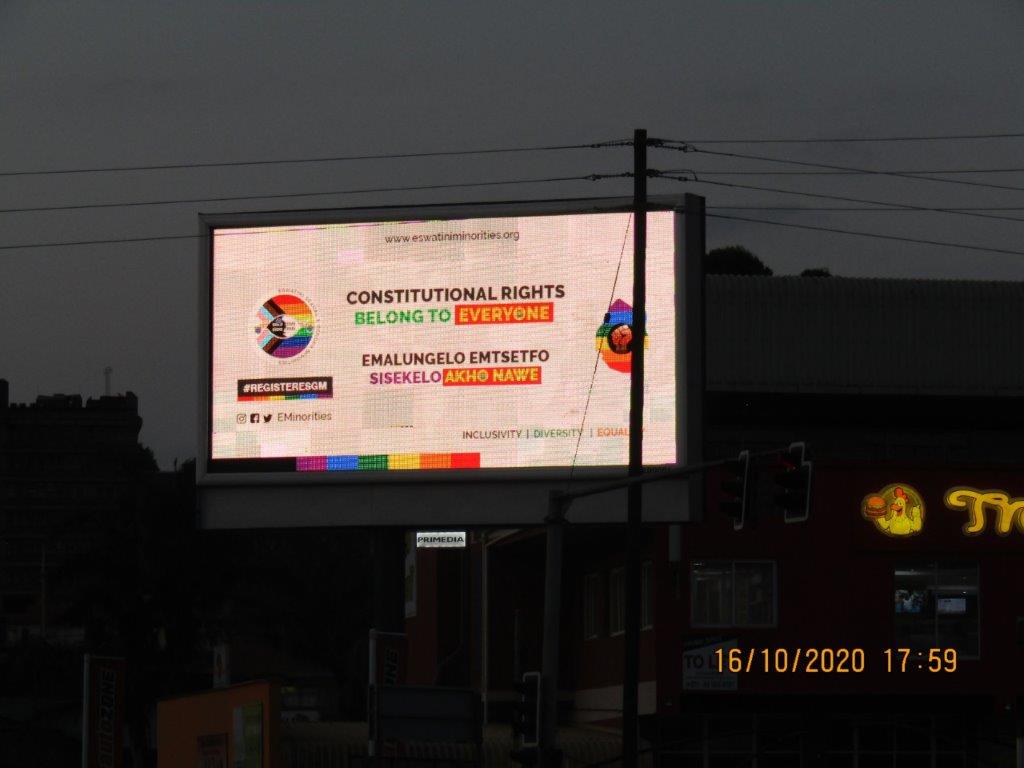 Eswatini Sexual and Gender Minorities (ESGM) is a human rights community-based advocacy organisation which aims to advance the protection of human rights of lesbian, gay, bisexual transgender and intersex persons in the kingdom of Eswatini.

The organisation works on reducing harm that affects the well-being of Swazis based on their sexual orientation, gender identity and expression.

In September 2019, ESGM applied to be registered as a company with the Eswatini’s Registrar of Companies. The Registrar refused to register the organisation arguing that ESGM’s objectives were unlawful because same-sex sexual acts are illegal in the country. ESGM and its members then filed an application in court to challenge the Registrar’s refusal to register the organisation.

The matter has been postponed twice, it was first scheduled to be heard on 24 June 2020, and was unfortunately postponed, it was then scheduled for 23 July 2020, however due to COVID-19 exposure within the courts,  the case was postponed again.

“ESGM takes pride in the spirit of the Constitution with its intent to protect all of Emaswati, we should be free to speak our minds and to associate with whomever we want, there is no democracy when you cannot freely associate, assemble and express yourself.”

Some have argued that the refusal to register ESGM is somehow premised on the bible. Notably, the bible itself states that “let anyone of you who is not without sin be the first to throw a stone at her”. While Christianity underpins much of values in Eswatini, we are a secular State. This is a case about the dignity of the person and not about the will of the majority or any religious debate. The beliefs of some, by definition, is not the beliefs of all. The courts’ duty is to uphold the Constitution and to recognise the dignity of any citizen whose rights and freedoms have been invalidly taken away. Moral and religious beliefs can never be the basis to limit constitutional rights.

In challenging the Registrar’s refusal to register the organisation, ESGM is arguing that constitutional rights in Eswatini belong to everybody, that everyone has a right to have their dignity respected and protected, and that persons’ freedom to associate should not be denied based on arbitrary grounds, including their sexual  orientation.

The State can only limit constitutional rights if it is reasonable to do so in a democratic society and if it is necessary to further a legitimate aim. The Registrar’s reasons for refusing to register ESGM does not amount to a legitimate aim.

WE CALL ON ALL TO SUPPORT OUR STRUGGLE TO PROTECT AND PROMOTE THE RIGHTS TO FREEDOM OF ASSOCIATION, ASSEMBLY AND EXPRESSION IN ESWATINI