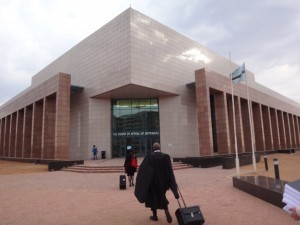 The meeting held on 10 and 11 August, was the first in a series planned to enable stakeholders to comment on the SADC model Law on Child Marriage whose development the SADC Parliamentary Forum is spearheading.

During the meeting, the approximately 10 experts pored over the draft law as well as a related position paper line by line and made extensive comments and recommendations which will be incorporated.

The aim is to ensure that once the SADC model Law on Child Marriage has been fully developed, it can be used to effectively prohibit, prevent and respond to all forms of child marriage, which currently affects millions of girls in Southern Africa and beyond.

After the meeting, the experts were upbeat. Ann Skelton, the director of the Centre for Child Law at the University of Pretoria, said the meeting was necessary to remove grey areas, ensure that the proposed model law is consistent with regional and international instruments related to child marriage and to make it serve the best interests of the children it seeks to protect.

“I thought the meeting grappled with some tough questions, the central one being where to find the fine balancing line between protecting girls (which seems to require an inflexible approach) and recognising their growing autonomy and right to develop relationships (which requires a flexible approach),” Skelton said in an interview.

She stressed that this tension was not uniquely found in the child marriage question, but was very acute in this debate.

“I am very happy  that the expert group was clear about not criminalising children. It also appreciated the care taken to distinguish between pre-existing marriages (which it is proposed will be voidable at the instance of a party), and those that may occur after a prohibition of marriage law is passed (which will be automatically void).”

Ronaldah Lerato Karabo Ozah, an attorney who also works at the Centre for Child Law at the University of Pretoria, said she was grateful to have been part of a panel of experts who had the opportunity to give input on a document that is aimed at protecting girls and towards the realisation of the rights to which they are entitled.

“I am mindful of the fact that the law on its own will not eradicate child marriages but will remind us all of our obligations to protect girl children and this is the responsibility of all – communities, lawyers as well as religious and traditional leaders,” she said.

Ozah said the meeting was important as it enabled participants to give inputs not only on the draft SADC model Law on Child Marriage, but also on the strategic way forward that will ensure that relevant individuals and groups are lobbied to garner support for the model law.

“Even if this takes a bit longer, it is crucial that we consult as widely as possible and get as much support for the model law,” she said.

Ms Nyasha Chingore, a human rights lawyer who works at the Southern Africa Litigation Centre (SALC) said being part of the experts’ panel was an “intriguing” experience.

“It was interesting to see how expert team members from varying backgrounds tried to negotiate the tensions that will inevitably arise in attempting to legislate in this area. While one would expect that considerations of ”custom and religion” and the impact of prohibition with sanctions would present challenges which are not easy to navigate, for me the stickiest point was figuring out how the model law could recognise the evolving capacities of children without compromising the very essence of what the model law seeks to do – eradicate child marriage in any and all its forms,” she said.

Chingore cited the example of the discussion around whether the model law should leave room for any “loopholes” at all including those in age considerations.

“The debate in the experts’ team is of course just a precursor to the debates that will ensue in parliaments across the region. The team is generally a group of like-minded people who agree on the principles. However, the engaging debate that ensued reminded me that while we agree on the problem and indeed the end goal, it is important to critically assess the nuances and to remember that there are no easy answers.”

Aquinaldo Celio Mondlate, a researcher specialising in children’s rights, said the meeting was a great platform to reflect on the problems that affect children involved in child marriage and its negative consequences.

“It was interesting to learn about the sensitivities around the issues relating to child marriage, mainly the challenges in ensuring that the situation of children who are currently involved in child marriage is not worsened when SADC states incorporate provisions of the model law in their national laws.

“Concerns raised also included the fact that there is a need to safeguard the rights of children who are involved or affected by child marriage including the children born out of child marriage,” Mondlate said.

Asha Mohamud, UNFPA East and Southern Africa Adolescent Sexual and Reproductive Health Policy adviser with the United Nations Population Fund (UNFPA) which is one of the institutions supporting the SADC PF in the development of the model law, sounded excited and optimistic.

She stressed the importance for all interested parties to maintain the momentum to ensure that the draft model law is shared widely and finalised soon.

“I am very enthusiastic. I know that we have a lot in front of us but when I realise that we are making a difference I feel encouraged. The eradication of child marriages is critical achieving demographic dividends and socio-economic development. When you have large numbers of young people marrying, they have large numbers of children which indicates high fertility, which leads to a high dependency ratio and poverty,” she said.

More stakeholders that include civil society organisations, judges, and academicians, legal drafters and law commissions will be consulted before the model law can be finalised.

According to a road map proposed by SADC PF secretary general Esau Chiviya, the next steps will include the presentation of the polished draft model Law on Child Marriage to SADC PF committees for further consideration before it is presented to the SADC PF Plenary Assembly for approval and adoption.

The final step will entail the SADC PF boss presenting the model law to the SADC executive secretary before being adopted by the 39th Plenary Assembly Session of the SADC PF for the transformation into a SADC Protocol on Child Marriage to commence.

1 April 2022, Malawi  We applaud the parliament for considering the plight of the Malawian boy child. CHREAA has seen a lot of young boys being incarcerated for indulging in consensual and non-exploitative sexual relations with their female peers. CHREAA will always be against any kind of sexual exploitation of…