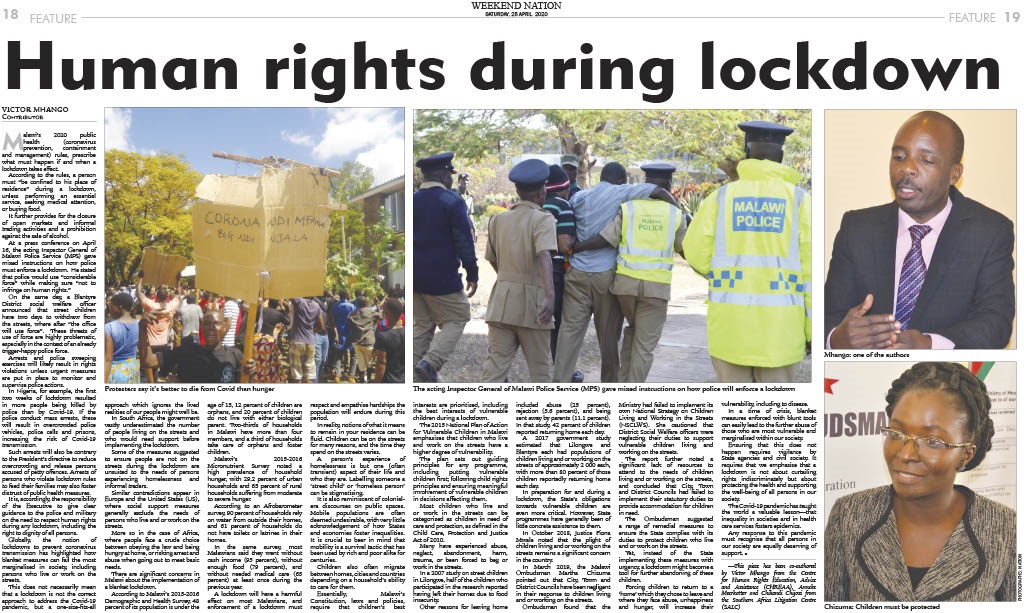 The Weekend Nation
25 April 2020
Victor Mhango from the Centre for Human Rights Education, Advice and Assistance (CHREAA) and Anneke Meerkotter and Chikondi Chijozi from the Southern Africa Litigation Centre SALC)

Malawi’s 2020 Public Health (Corona Virus Prevention, Containment and Management) Rules, prescribes what must happen if and when a lockdown takes effect. According to the rules, a person must “be confined to his place of residence” during a lockdown, unless performing an essential service, seeking medical attention, or buying food. It further provides for the closure of open markets and informal trading activities and a prohibition against the sale of alcohol.

At a press conference on 16 April 2020, the Acting Inspector General of Police gave mixed instructions on how police must enforce a lockdown. He stated that police would use “considerable force” while making sure “not to infringe on human rights”. On the same day, a Blantyre District Social Welfare Officer announced that street children have two days to withdraw from the streets, whereafter “the office will use force”. These threats of use of force are highly problematic, especially in the context of an already trigger-happy police force.

Arrests and police sweeping exercises will likely result in rights violations unless urgent measures are put in place to monitor and supervise police actions. In Nigeria, for example, the first two weeks of lockdown resulted in more people being killed by police than by COVID-19. If the police conduct mass arrests, these will result in overcrowded police vehicles, police cells and prisons, increasing the risk of COVID-19 transmission. Such arrests will also be contrary to the President’s directive to reduce overcrowding and release persons accused of petty offences. Arrests of persons who violate lockdown rules to feed their families may also foster distrust of public health measures. It is accordingly the responsibility of the Executive to give clear guidance to the police and military on the need to respect human rights during any lockdown, including the right to dignity of all persons.

Globally, the notion of lockdowns to prevent coronavirus transmission has highlighted how blanket measures can fail the most marginalised in society, including persons who live or work on the streets. This does not necessarily mean that a lockdown is not the correct approach to address the COVID-19 pandemic, but a one-size-fits-all approach which ignores the lived realities of our people might well be. In South Africa, for example, the government vastly underestimated the number of people living on the streets and who would need support before implementing the lockdown. Some of the measures suggested to ensure people are not on the streets during the lockdown are unsuited to the needs of persons experiencing homelessness and informal traders. Similar contradictions appear in Europe and the United States, where social support measures generally exclude the needs of persons who live and or work on the streets. More so in the case of Africa, where people face a crude choice between obeying the law and being hungry at home, or risking arrest and abuse when going out to meet basic needs.

There are significant concerns in Malawi about the implementation of a blanket lockdown. According to Malawi’s 2015-2016 Demographic and Health Survey, 48% of its population is under the age of 15, 12% of children are orphans, and 20% of children do not live with either biological parent. Two-thirds of households in Malawi have more than four members, and a third of households take care of orphans and foster children. Malawi’s 2015-2016 Micronutrient Survey noted a high prevalence of household hunger, with 29,2% of urban households and 65% of rural households suffering from moderate to severe hunger. According to an Afrobarometer survey, 90% of households rely on water from outside their homes, and 61% of households do not have toilets or latrines in their homes. In the same survey, most Malawians said they went without cash income (95%), without enough food (79%), and without needed medical care (65%) at least once during the previous year. A lockdown will have a harmful effect on most Malawians, and enforcement of a lockdown must respect and empathise with hardships endured by the population during this period.

In reality, notions of what it means to be remain in your residence can be fluid. Children can be on the streets for many reasons, and the time they spend on the streets varies. A person’s experience of homelessness is but one (often transient) aspect of their life and who they are. Labelling someone a ‘street child’ or ‘homeless person’ can be stigmatising. It is also reminiscent of colonial-era discourses on public spaces. Mobile populations are often deemed undesirable, with very little acknowledgement of how States and economies foster inequalities. It is crucial to bear in mind that mobility is a survival tactic that has been used by rich and poor alike for centuries. Children also often migrate between homes, cities and countries depending on a household’s ability to care for them.

Most children who live and or work in the streets can be categorised as children in need of care and protection, as defined in the Child Care, Protection and Justice Act of 2010. Many have experienced abuse, neglect, abandonment, harm, trauma, or been forced to beg or work in the streets. In a 2007 study on street children in Lilongwe, half of the children who participated in the research reported having left their homes due to food insecurity. Other reasons for leaving home included abuse (25%), rejection (5,6%), and being sent away by parents (11,1%). In that study, 42% of children reported returning home each day. A 2017 government study estimated that Lilongwe and Blantyre each had populations of children living and or working on the streets of approximately 2000 each, with more than 80% of those children reportedly returning home each day.

In preparation for and during a lockdown, the State’s obligations towards vulnerable children are even more critical. However, State programmes have generally been of little concrete assistance to them. In October 2018, Justice Fiona Mwale noted that the plight of children living and or working on the streets remains a significant concern in the country. In March 2019, the Malawi Ombud Martha Chizuma pointed out that City and District Councils have been negligent in their response to children living and or working on the streets. She found that the Ministry had failed to implement its own National Strategy on Children Living and Working in the Streets (NSCLWS). She cautioned that District Social Welfare Officers were neglecting their duties to support vulnerable children living and working on the streets. The report further noted a significant lack of resources to attend to the needs of children living and or working on the streets, and concluded that City and District Councils had failed to implement their statutory duties to provide accommodation for children in need. The Ombud suggested a range of remedial measures to ensure the State complies with its duties to protect children who live and or work on the streets. Yet, instead of the State implementing these measures with urgency, a lockdown might become a tool for further abandonment of these children. Forcing children to return to a ‘home’ which they chose to leave and where they face abuse, unhappiness and hunger, will increase their vulnerability, including to disease.

In a time of crisis, blanket measures enforced with blunt tools can easily lead to the further abuse of those who are most vulnerable and marginalised within our society. To ensure that this does not happen requires vigilance by State agencies and civil society. It requires that we emphasise that a lockdown is not about curtailing rights indiscriminately but about protecting the health and supporting the well-being of all persons in our society. The COVID-19 pandemic has taught the world a valuable lesson – that inequality in societies and in health care services fosters epidemics. Any response to this pandemic must recognise that all persons in our society are equally deserving of support.