Malawi: Challenging the offence of begging 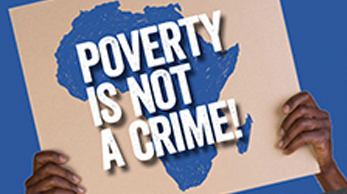 Thirteen individuals were arrested and charged under section 180(b) of the Penal Code at different places in Blantyre. They appeared together before the magistrate on 12 April 2017 and were at that stage informed that the charge included that they were vandalising people’s cars if the people refused to help them. It is this aspect of the charge that the magistrate reacted to even though these actions were not admitted by the accused. The Magistrate convicted 13 individuals of begging. The accused persons’ disabilities meant that they were unable to be brought into open court, and the magistrate went to the cells to convene the court hearing. Upon conviction of the unrepresented applicants, an application was made to review the charges against them for misjoinder, to review the guilty plea accepted by the magistrate, and to seek a referral of the case by the Chief Justice to a bench of 3 judges. The applicants seek to challenge the current interpretation of sections 180(b) and 180(f) of the Penal Code, to the extent that it violates their constitutional rights.

The case is currently awaiting certification as a constitutional case. The applicants are represented by Chikondi Chijozi, and supported by the Centre for Human Rights Education, Advice and Assistance Centre (CHREAA).

Section 180(b) of the Penal Code provides: “Every person wandering or placing himself in any public place to beg or gather alms, … is deemed an idle and disorderly person.”

Section 180(b) currently targets all forms of begging, whilst the applicants submit that it ought to be interpreted narrowly to apply to acts of aggressive, disruptive, obstructing or harassing begging only.

Section 180(f) of the Penal Code provides: “Every person wandering about and endeavouring by the exposure of wounds or deformation to obtain or gather alms, is deemed an idle and disorderly person.” As a result of the broad interpretation of the offence, and the fact that it exists in a context where there is significant stigma in society against persons with disabilities, it is likely that the offence will continue to be enforced in a manner that is arbitrary and discriminatory. The applicants accordingly submit that the offence serves no purpose as the conduct complained of is already incorporated into section 180(b) of the Penal Code, as can be seen from how sections 180(b) and (f) were used interchangeably by the magistrate who convicted the applicants.