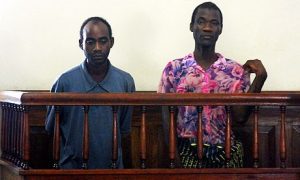 A couple in Malawi were today found guilty of gay sex, a crime under laws dating from the colonial era, in a judgment that campaigners warn could set back human rights across Africa.

Steven Monjeza, 26, and 20-year-old Tiwonge Chimbalanga were convicted of unnatural acts and gross indecency, prompting anger and condemnation from activists in Malawi and around the world. The couple, who will learn their sentence on Thursday, could be jailed for up to 14 years with hard labour.

Monjeza and Chimbalanga became Malawi’s first same-sex couple to commit publicly to marriage at a symbolic ceremony last December. They were arrested two days later and detained in harsh conditions. Homosexuality in Malawi is outlawed and remains deeply taboo.

Delivering judgment in Blantyre today, magistrate Nyakwawa Usiwa-Usiwa found the couple guilty of buggery – which he described as “against the order of nature”. He added: “The state proved the case beyond reasonable doubt.”

Mauya Msuku, a lawyer for the couple, appealed for mercy. “As first offenders, they should not be given custodial sentence. This was a technical offence and the defence is convinced the convicts have already paid for the offence.” An acquittal would have been likely to cause outrage in the socially conservative and impoverished country. But the guilty verdict provoked no less anger from activists and human rights groups.

Gift Trapence, director of the Centre for the Development of People, said: “I am not convinced of the conviction. Human rights have been trodden upon.”

Undule Mwakasungura, head of the Centre for Human Rights and Rehabilitation, said the conviction showed Malawi was not “accommodating on issues of human rights”. “We have been let down. Homosexuality is both a human rights and public health issue. Gays need to find a strategy to challenge … for a policy and legal framework that would allow them to operate as a minority group in Malawi.”

Richard Brigden, a legal consultant with the Southern African Litigation Centre, said the conviction was a “major tragedy for all Malawians who will now not be able to fight for human rights”. The judgment would make it difficult for people to fight for the rights of minority groups such as gays, he added. “The trial does not afford people protection and freedoms.”

Brigden said Malawi’s estimated 10,000 homosexuals would be unable to seek help to tackle HIV/Aids because they were unrecognised and would continue to live in fear.

Church leaders in Malawi have backed the government, saying homosexuality is “sinful” and the west should not use its financial power to force Malawi to accept homosexuality. Malawi relies on donors for 40% of its development budget.

Gay sex remains illegal in 37 countries in Africa and is widely vilified. There are fears that the Malawi judgment could set a precedent for other governments eager to crack down on increasingly assertive liberation movements.

Mark Bromley, of the Council for Global Equality, said: “The verdict is shocking and represents a devastating blow for human rights in the region. Fortunately the US government is joining many other governments and human rights organisations in speaking out against this injustice.”

Peter Tatchell of the rights group Outrage! disputed the court’s finding that the men had engaged in sexual intercourse. “This is an outrageous verdict,” the veteran British campaigner said. “While Steven and Tiwonge freely confirmed their love for each other, there was no credible evidence that they had committed any illegal homosexual acts.”

He added: “I appeal to governments worldwide, especially the South African government, to condemn this harsh, bigoted judgment and to urge its reversal.”