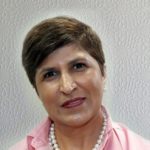 Zohra Dawood has degrees in law and a Master’s degree in economic history. She worked for a decade as chief researcher for a land rights organisation. After 1994, she worked with the Department of Land Affairs and Agriculture, where she was involved in policy formulation and implementation, including negotiations and settlement of land claims.