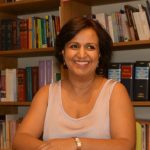 Kaajal Ramjathan-Keogh joined SALC in February 2015. She obtained her B.Proc LLB degrees from the University of Natal (now University of Kwa Zulu Natal). She was employed at Lawyers for Human Rights from 2002- 2014 where she initially headed the Immigration Detention Monitoring Unit and was thereafter appointed as Manager of the Refugee and Migrants Rights Programme, which position she held from 2007- 2014.

She was the board chairperson of the Consortium for Refugees and Migrants in South Africa from 2007-2011. She was the Southern African regional representative for the International Detention Coalition (IDC) and sat on the IDC’s Advisory Panel from 2008- 2014. She is a founding member of the secretariat of the African NGO Taskforce which is a network of organisations working on refugee protection in Africa.

The Taskforce has been working on actively capacitating local NGOs on aspects of refugee protection. She has significant experience and expertise in the fields of asylum, migration, refugee protection, citizenship and statelessness.

Kaajal was previously employed at the International Organization for Migration.