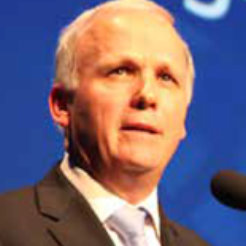 Dr Mark Ellis is the Executive Director of the International Bar Association (IBA) the foremost international organisation of bar associations, law firms and individual lawyers in the world.

Twice a Fulbright Scholar at the Economic Institute in Zagreb, Croatia, Mark Ellis earned his J.D. and economics degrees from Florida State University and his PhD in international criminal law from King’s College, University of London. Prior to joining the IBA, Dr. Ellis spent ten years as the first Executive Director of the Central European and Eurasian Law Initiative (CEELI), a project of the American Bar Association (ABA), providing technical legal assistance to twenty-eight countries in Central Europe and the former Soviet Union, and to the International Criminal Tribunal for the Former Yugoslavia (ICTY) in The Hague.

Mark is a frequent speaker and media commentator on international legal issues. He has published extensively in the areas of international humanitarian law, war crimes tribunals, and the development of the rule of law. His op-eds have appeared in The New York Times, The International Herald Tribune, The Sunday Times (South Africa) and The Times (London).