Lesotho: Police must be held accountable for unnecessary use of force against protestors

Home » Lesotho: Police must be held accountable for unnecessary use of force against protestors 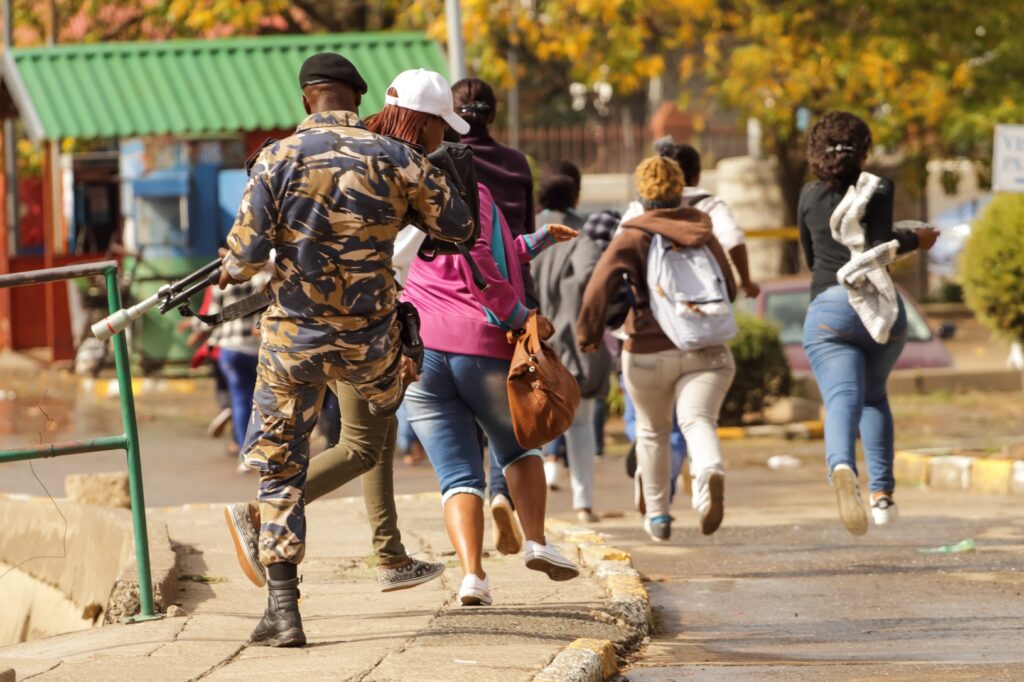 The Transformation Resource Center (TRC), the International Commission of Jurists (ICJ) and the Southern Africa Litigation Centre (SALC) condemn the killing of a university student and an apparently unjustified physical assault on six other students who sustained serious injuries at the hands of police during a protest at the National University of Lesotho (NUL).

We remind the government of its legal obligations to respect and ensure the rights to life and freedom from ill-treatment, including during police operations at demonstrations.  The government must protect, not violate, the exercise of the rights to freedom of expression, assembly and association. These rights are guaranteed under the Constitution of Lesotho and international human rights treaties to which Lesotho is a State Party.

On 16 June 2022, NUL student Kopano Makutoane was shot and tragically killed during a protest at the University’s Roma campus. Following the news that the National Manpower Development Secretariat, without a clear explanation, had slashed the monthly stipends of students by more than 50%, a group of students took to the campus to protest this reduction in their allowances.

The demonstration got out of control as some of the protestors began interrupting examinations and throwing stones at university property, which caused damage to various buildings. To the best of our knowledge, there is no credible evidence of violent attacks by demonstrators against people. The police were called in to restore order. Instead of applying means of law enforcement consistent with universally recognized professional policing standards and human rights, the Lesotho Mounted Police Service went to the extreme of firing live ammunition at the crowd of students, resulting in the death of one student, as well as numerous injuries to others. The Police Service asked for “forgiveness” following this incident and reported that an internal investigation into the matter has been initiated.

“The apology tendered by the police and the government does not absolve the authorities of their responsibilities and obligations to investigate and prosecute killings and assaults, as well as adhering to international human rights law and standards on the use of force, including the United Nations Basic Principles on the Use of Force and Firearms by Law Enforcement Officials”, noted Advocate Mokitimi Ts’osane of TRC’s Human Rights and Access to Justice Programme.

In accordance with these Principles, the use of force should be exceptional, necessary, and proportional and, as set out under principle 9, “intentional lethal use of [force] may only be made when strictly unavoidable in order to protect life.”

“It is deeply concerning that the police resorted to using firearms with live ammunition against unarmed student protestors as a means of quashing protest action”, said Kaajal Ramjathan-Keogh, ICJ’s Africa Director.

The right to protest, which is part of the right to peaceful assembly, is protected under international human rights law, which recognizes the importance of protests, demonstrations, and pickets as a catalyst for social and political change. While the right to peaceful assembly may be subject to limited restrictions to protect public order, any such restrictions must be necessary and proportionate. The wholesale banning or suppression of peaceful protest is not a lawful interference.

“We urge the Lesotho authorities to safeguard the rights to freedom of assembly, association and expression and create an enabling environment for students in Lesotho to engage in peaceful demonstrations”, said Melusi Simelane, SALC’s Civic Rights Cluster Programme Manager.

Calls for police accountability for violent and disproportionate responses to protest must be applied across the board but are heightened by the fact that the protesters were advocating for the protection of their rights associated with affordable education in terms of the Constitution and international law. This most recent incident is one of many in 2016, 2018 and 2019, to name a few, of police using unnecessary and disproportionate force to disperse students during protests over delays in payment of student allowances or reductions in allowances. This appears to be an ongoing problem.

“As we’ve seen from various student movements throughout history, including #FeesMustFall and #RhodesMustFall, demonstrations are a valuable tool for making injustices known. Students should be empowered to protest peacefully and to speak out against injustice, without fear for their safety”, concluded Ramjathan-Keogh.

While acknowledging the positive steps taken towards prosecuting offenders in the last few weeks, the TRC, SALC and ICJ call on the authorities to carry out a prompt, thorough, independent, and impartial investigation into the killing and wounding of protestors and to prosecute those identified as responsible in fair trials.

Finally, while separate from the question of police conduct in responding to protest, we consider that the Lesotho government must do much more to meet its obligations in respect of the right to education, including to ensure its accessibility and affordability.

Sections 14, 15 and 16 of the Constitution of Lesotho, also entitle everyone to freedom of expression, peaceful assembly and association and create a concomitant duty on the State to ensure that demonstrators are protected from being subjected to excessive force and can freely exercise these rights. Law enforcement officials in Lesotho must refrain from the use of firearms to stop peaceful protest action and the authorities should conduct more comprehensive training with police officials on non-lethal and proportionate methods of crowd control.