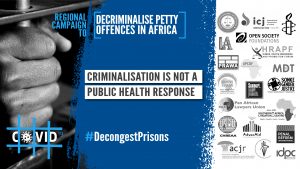 “For centuries criminal laws have been used to regulate urban spaces, with a cruel focus on removing poor and marginalised persons from such areas. Criminal laws, particularly vagrancy offences, have always been used to arrest, detain, evict, or put to work those persons who are viewed unsuitable to public spaces. Following the Principles on the Decriminalisation of Petty Offences issued by the African Commission on Human and Peoples’ Rights, this Advisory Opinion by the African Court goes a long way towards encouraging States to reconsider the utility of long-standing policing practices,” said Anneke Meerkotter, Acting Executive Director of the Southern Africa Litigation Centre. “The African Court’s Advisory Opinion is a fitting end to a year in which countries have used criminal laws with fervour in response to the COVID-19 pandemic; and a year in which citizens across the world have responded in unity against systemic police abuse of marginalised groups in society.”

For information on the Regional Campaign to Decriminalise Petty Offences, see here.

Why are vagrancy offences problematic?

When vagrancy offences were introduced in Africa during the colonial era, their purpose was coercion and incarceration to maintain unequal labour relations and social structures. (For more information on the origin of vagrancy offences in Africa, see here.) Vagrancy offences have since become a catch-all category favoured by States to address what it deems a range of undesirable behaviours whilst sidestepping the requirements of criminal law and procedure.

Vagrancy offences are used with frequency in many countries to arrest and detain persons in the absence of any proof of criminal activity. The manner of enforcement of these offences are contrary to the basic principles underlying criminal law and threatens the rule of law – these offences are based on a person’s condition, state of being, and social and economic status. These offences are overly broad and allow police a wide discretion to decide whom to arrest. Vagrancy offences also place the burden of proving one’s innocence on the accused. Such arrests, in turn, exacerbate prison overcrowding. Once arrested, police provide little or no food to persons in custody, and conditions are often unhygienic and hazardous. Arrests drain the resources of families who have to bring food and pay fine.

The Principles on the Decriminalisation of Petty Offences defines “vulnerable persons” as “persons who are marginalised in society and the criminal justice system because of their status, or an intersection of one or more statuses”. Vagrancy offences are used to arrest and harass persons living in poverty, persons who experience homelessness, children who live and work on the street, persons who beg, older persons, persons who are marginalised based on sexual orientation or gender identity, persons with disabilities, street traders and vendors, refugees and asylum seekers and sex workers. The African Court’s decision will have a significant impact on vulnerable persons, whose needs are seldom acknowledged in law reform processes.

What were the issues before the African Court?

The Court concluded that vagrancy laws and by-laws violated:

The Court further considered whether vagrancy laws and by-laws, including but not limited to, those which allow for the arrest of someone without a warrant simply because the person has no means of subsistence and cannot give a satisfactory account of him or herself, violate the African Charter. The Court held that such laws violated:

SALC Policy Brief on ICC Witnesses and the Review of the Rome Statute: The Missing Link

Reaffirming tolerance in Southern Africa on 16 November: The UN international day of tolerance