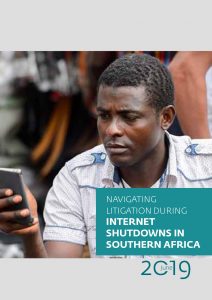 As of 2018, ITU estimated that 51.2% of the global population was using the internet. Much of the recent growth is occurring in Africa, which saw a 20% bump in internet users over the course of 2017. There are now half a billion users across the continent, with some of the highest percentage of connectivity occurring in Southern Africa. As people have become more connected, it has changed how citizens participate in civic life, as well as how governments respond to their citizens.

“An internet shutdown is an intentional disruption of internet or electronic communications, rendering them inaccessible or effectively unusable, for a specific population or within a location, often to exert control over the flow of information.”