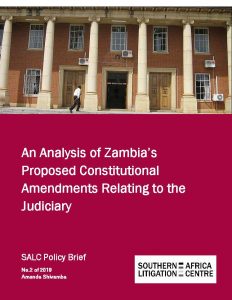 The Zambian Constitutional Amendment Bill was released for public comment on 21 June 2019. Section 79 of the Constitution provides that a Bill which seeks to amend the Constitution must be published in the Gazette 30 days before its first reading. On the second and third readings the Bill must be supported by two thirds of all members of the National Assembly in order to be enacted into law. This Policy Brief considers some of the proposed constitutional amendments relating to the Judiciary. The current Zambian Constitution provides for the independence of the judiciary. Article 122 of the proposed Bill states that “the Judiciary shall be autonomous and shall be subject only to this Constitution and the law and not subject to the control or direction of a person or an authority”. This is to be commended, but it remains necessary to scrutinize the other proposed constitutional amendments in order to ascertain whether they may result in political interference with the judiciary.

Zambia: SUBMISSION ON THE REVIEW OF THE PENAL CODE AND CRIMINAL PROCEDURE CODE

The Global Gag Rule and Access to Abortion: Impact on law reform in Zimbabwe, Zambia, Mozambique, Eswatini and Malawi