SALC IN THE NEWS: Incremental gains and public activism pave the way for decriminalisation of same-sex sexual conduct in Botswana

Home » SALC IN THE NEWS: Incremental gains and public activism pave the way for decriminalisation of same-sex sexual conduct in Botswana 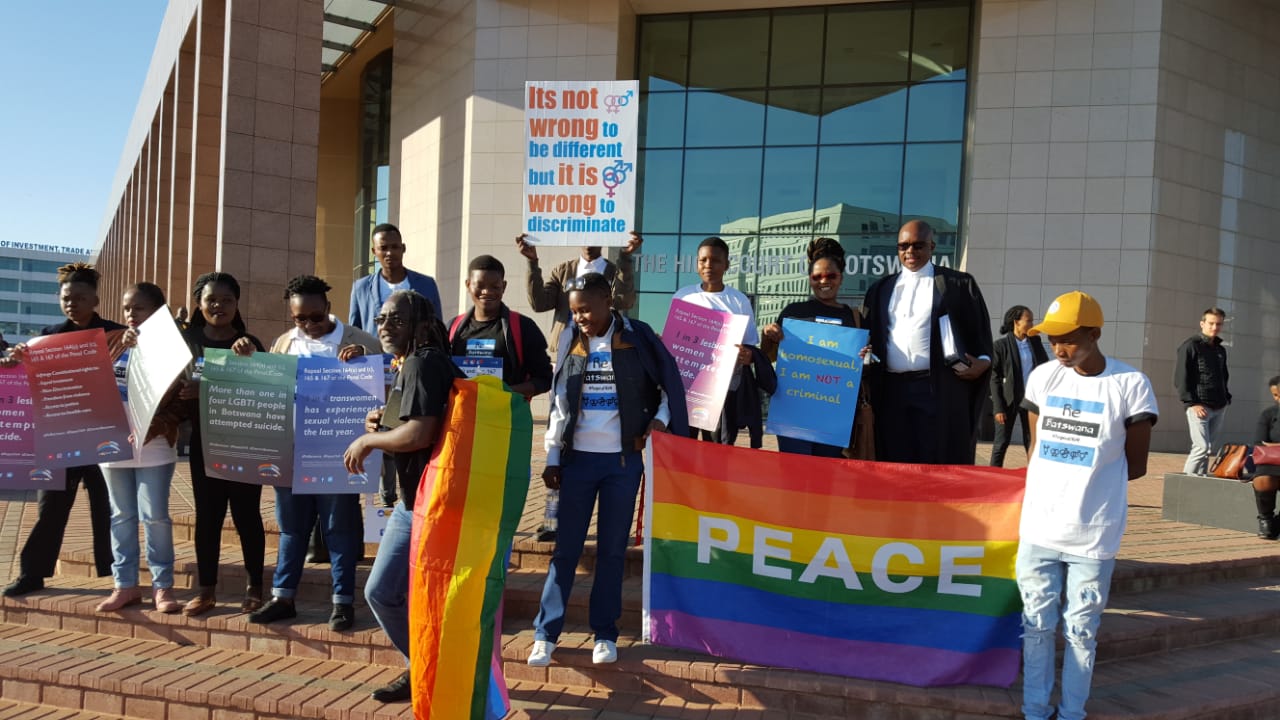 The recent Botswana court victory, which will bring enormous benefits to the LGBT community in Botswana and beyond, would not have been possible without the selfless work of LGBT activists in Botswana. Their willingness and resilience to publicly press for reform and respect for LGBT people and their rights in an environment that is often hostile or negative toward LGBT issues is particularly courageous. Having unsuccessfully engaged with government on several issues that affect them, these activists used their visibility and influence to eventually take their battle to the courts to assert their rights.

In a ground-breaking unanimous decision, on 11 June 2019, the Botswana High Court became the second Court in Africa, after South Africa, to decriminalise same-sex sexual conduct among consenting adults. Sections 164(a), (c) and 165 of the Botswana Penal Code outlawed or criminalised sexual intercourse and/or attempts thereof between persons of the same sex. These provisions imposed up to seven years imprisonment for individuals found in contravention.

These archaic provisions are a vestige of colonial-era laws imposed on Botswana by the United Kingdom. Although the United Kingdom has removed these punitive laws from its own statute books, the laws and their effects continue to haunt several countries that were formerly British territories, inhibiting the realisation of full human potential and dignity of LGBT persons throughout the globe.

In response to the decision, Anna Mmolai-Chalmers, CEO of Lesbians, Gays, Bisexuals of Botswana (LEGABIBO) who was admitted as a Friend of Court in the case, remarked that “although it (the removal of the laws) does not right wrongs done to individual members of the LGBT community, it is a step to restoring our dignity as human beings”, creating an important space to embrace a just and compassionate society.

In this regard the High Court questioned the purpose of these laws and their place in a country that endeavours to embrace diversity and compassion: “What regulatory joy and solace is derived by the law, when it proscribes and criminalises such conduct of two consenting adults, expressing and professing love to each other, within their secluded sphere, bedroom, confines and/or precinct? The Court then concluded: “Personal autonomy on matters of sexual preference and choice must, therefore, be respected. Any criminalisation of love or finding fulfilment in love dilutes compassion and tolerance.”

Significantly, the Court rejected the government’s arguments that public morality or public interest is a valid justification for these laws. Instead, the Court emphasised that bare assertions of public morality or public interest cannot justify the limitation of fundamental rights. The Court’s rejection of this position is particularly significant, given many other African governments used similar reasoning to justify the imposition or continuation of laws that discriminate against the LGBT community.

Importantly, this victory, which will bring enormous benefits to the LGBT community in Botswana and beyond, would not have been possible without the selfless work of LGBT activists in Botswana. Their willingness and resilience to publicly press for reform and respect for LGBT people and their rights in an environment that is often hostile or negative toward LGBT issues is particularly courageous. Having unsuccessfully engaged with government on several issues that affect them, these activists used their visibility and influence to eventually take their battle to the courts to assert their rights.

This week’s result is the centrepiece of a long-term strategy by activists and several actors including, LEGABIBO and the Southern African Litigation Centre (SALC), to achieve broader social change in Botswana to protect and advance the dignity of LGBT persons in the country. A key component of this strategy was to incrementally litigate less controversial cases affecting the rights of LGBT persons before tackling more controversial issues, to create a “fertile” judicial environment where decriminalization of same-sex sexual conduct could take place. The strategy involved creating a body of laws in Botswana in which the rights of LGBT persons are recognised and protected. Simply put, this week’s decision, therefore, marks a culmination of many years of public activism and a deliberateness (on the part of activists) who sought to use incremental litigation gains and build jurisprudence which acknowledges the freedoms and dignity of LGBT persons.

The first in a series of incremental strategic litigation cases occurred in March 2016 in the so-called “LEGABIBO Registration” case, when the Botswana Court of Appeal ordered the government to register LEGABIBO as a non-governmental organisation (NGO) that promotes the rights of the LGBT community in Botswana. That decision came after the government of Botswana had refused to register LEGABIBO as the first LGBT organisation in Botswana for several years. The government sought to justify this discrimination on that basis that official recognition of an organisation that protects and promotes the rights of the LGBT community was incongruous in light of the criminalisation of same-sex sexual conduct. In rejecting this position, the Court of Appeal emphasized that “once we [as a society] recognise that persons who are gay, lesbian, bisexual, transgender or intersex are human beings… we must accord them the human rights which are guaranteed by the constitution to all persons, by virtue of their being human, in order to protect their dignity”. The LEGABIBO registration case was critical as it set the tone for all other LGBT cases that ensued in the country and in particular the ground-breaking victory we have seen this week.

Subsequently in 2017, in ND v Attorney General of Botswana and others, the High Court ordered the Registrar of Botswana to change the gender marker on a transgender man’s identity document from female to male. Adopting the logic of the Court of Appeal in the LEGABIBO case, the Court emphasised that “[the] State (and society) has a duty to respect and uphold the individual right to human dignity despite opposing and different views it might hold with regards to the applicant’s gender identity”. It further noted that the State must “promote tolerance, acceptance, and diversity”. That same year a prominent transgender activist, Ricki Kgositau, successfully brought a similar case, to change her gender marker.

Cumulatively, these cases and the public activism fostered an environment in which a discourse around the rights and dignities of LGBT persons was possible, paving the way for the court’s decriminalisation of same-sex, sexual conduct. Moreover, this decision is a significant victory for LGBT activists both in Botswana and across Africa for clearly and unambiguously dispelling the myth that homosexuality is in any way “un-African”. It should, therefore, serve as a highly persuasive precedent to courts across the region that the rights of LGBT people must be respected and protected, and that archaic, colonial and discriminatory laws cannot persist in 21st Century society and should be relegated to the dustbins or museums of history. DM

Tashwill Esterhuizen, LGBT and Sex Workers Rights Programme Head at the Southern African Litigation Centre (SALC). SALC, has provided legal and technical support to LEGABIBO in these cases in Botswana