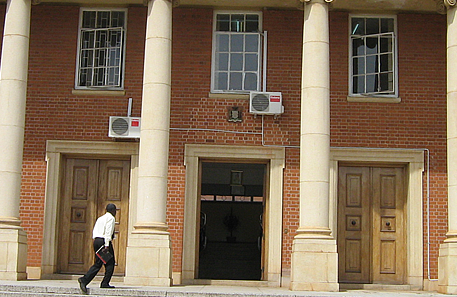 On 13 March 2018, the Supreme Court of Zambia gave a final judgment in the case of Savenda Management Services v Stanbic Bank Zambia Limited. Prior to that, the case had been heard in the High Court and Court of Appeal. Gregory Chifire, an anti-corruption activist, formed the opinion that the judgment lacked vigour and was concerned that there might have been undue influence exerted on the judges. Two months after the final judgment, he wrote a letter to the Chief Justice expressing his opinion of the Supreme Court judgment and its potential to inhibit justice. Her office responded to his letter by stating that the lawyers for both parties in the case are capable of addressing any concerns they might have relating to the judgment. The complainant subsequently filed a complaint with the Judicial Service Commission against the “casual attitude” of the 3 Supreme Court judges who handed down the judgment. The intention of this complaint was to prompt the judiciary to at least conduct preliminary investigations to confirm whether or not the judges had been unduly influenced.

Subsequently a number of articles appeared in local newspapers on possible corruption in the Savenda case. These articles were neither authored by Mr Chifire nor based on interviews with him. He received a summons, issued by the Chief Justice, with 4 contempt of court charges relating to the Savenda Management Services v Stanbic Bank Zambia Limited case.

In the Supreme Court

The hearing of the contempt case was conducted before a full bench of the Supreme Court, including judges who had presided over the Savenda Management Services v Stanbic Bank Zambia Limited case in the Supreme Court and against whom Mr Chifire had submitted a complaint to the Judicial Service Commission.

During the hearing, the complainant admitted that he authored the letter to the Chief Justice on 10 May 2018 and denied publishing or causing to be published articles on the issue. The Supreme Court delivered its judgment in the contempt of court case on 23 November 2018. In its judgment, the Supreme Court noted that Mr Chifire was not the only person raising concerns about the Savenda Management Services v Stanbic Bank Zambia Limited judgment and that “various individuals and media houses launched attacks on this Court and the Court of Appeal alleging that the decision was not only flawed but procured by corruption”. The Supreme Court, without evidence to this effect, held that Mr Chifire’s statements “viewed in their totality have the effect of fuelling discontent in the nation and a total breakdown of the justice system”. The Supreme Court expressed its view that the statements crossed the line of freedom of expression as they alleged corruption on the part of the judges.

In determining the sentence, the Supreme Court, without evidence, expressed as an aggravating factor that the statements “exited and fuelled the media frenzy which followed his utterances. He must thus, take full responsibility for the confusion he caused”. On 23 November 2018, the Supreme Court of Zambia, sitting as a court of first instance, accordingly found Mr Chifire guilty of contempt of court on all four grounds, and sentenced him to 6 years’ imprisonment on each of the four counts, with the terms to run concurrently.