THE NEED FOR A BALANCED DEBATE ON SWAZILAND AND AGOA

Home » THE NEED FOR A BALANCED DEBATE ON SWAZILAND AND AGOA 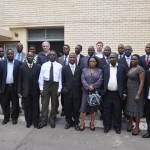 In Swaziland yesterday, Vincent Ncongwane, the secretary general of the Trade Union Congress of Swaziland (TUCOSWA), was due to speak at a prayer meeting held at Matsapha Industrial Centre. Matsapha is home to many textile factories – a sector expected to be hit hard by the withdrawal of financial assistance under the American African Growth and Opportunities Act (AGOA) – and Ncongwane sought to discuss the implications of the withdrawal and to explain civil society’s position on the matter. However, as he was about to address the meeting, members of the Swazi Royal Police apprehended him, prevented him from speaking and ordered that he leave the venue.

All AGOA financial assistance is conditional on a list of requirements set out in American legislation, which include that to be eligible a country must be progressing towards establishing “the rule of law, political pluralism, and the right to due process, a fair trial, and equal protection under the law”, as well as “protection of internationally recognized worker rights, including the right of association, the right to organise and bargain collectively, a prohibition on the use of any form of forced or compulsory labour, a minimum age for the employment of children, and acceptable conditions of work with respect to minimum wages, hours of work, and occupational safety and health”.

As part of its review of Swaziland the United States government set five benchmarks in order for the country to retain its eligibility under AGOA. These benchmarks were made public and the Swazi government assured its citizens that it would meet the targets. The benchmarks included amendments to the Industrial Relations Act, the Suppression of Terrorism Act and the Public Order Act, as well as implementation of the Code of Good Practice on Protest and Industrial Action.

However, in June 2014, President Obama announced that, as a result of its failure to meet the stated targets, Swaziland’s eligibility for AGOA assistance had been withdrawn. The President specifically highlighted Swaziland’s failure to protect freedom of association and expressed concern about “the use of security forces and arbitrary arrests to stifle peaceful demonstrations.”

The Swazi economy is set to experience job losses as a result of the termination of AGOA assistance, with the textile industry being particularly vulnerable. However, despite these consequences, Swazi civil society – including the trade unions – has welcomed the American decision. Civil society believes that by making AGOA assistance conditional on the achievement of a set of ascertainable goals the Swazi government will be compelled to improve conditions for workers in Swaziland as well as broaden the space for public association and ensure greater respect for the rule of law. The Swazi government, on the other hand, contends that it has met the conditions set by the Americans and that the withdrawal of eligibility was unjustified.

With the media in Swaziland heavily censored and controlled by the state, there has been very little opportunity for civil society to explain their position, and the state has been able to portray civil society’s support for withdrawal of eligibility as the reason for the potential job losses and other negative financial consequences. When Ncongwane and human rights lawyer Sipho Gumedze attended a civil society meeting held earlier this month to coincide with the US-Africa Summit in Washington, Swazi Prime Minister Barnabus Sibusiso Dlamini said in parliament that the pair should be strangled on their return because their presence threatened to undermine the governmental attempts to have AGOA eligibility restored.

Since their return to Swaziland Ncongwane and Gumedze have sought to use public meetings to explain that their visit to the United States was unrelated to AGOA, and to clarify why civil society has supported the withdrawal from AGOA eligibility. Perhaps it is because civil society organisations highlight the very real and very common human rights violations in Swaziland as explanation for the withdrawal, or perhaps it is because vocal activists like Ncongwane and Gumedze threaten the hegemony of governmental communication about AGOA, but Swazi authorities have taken extreme steps to ensure that Ncongwane and Gumedze are simply not given a platform from which to speak.

By preventing Ncongwane from speaking at the prayer meeting yesterday, Swazi authorities have once again inhibited the AGOA debate. This conduct deprives Swazi citizens of the full story, and prevents them from forming their own opinions on an issue that may well have a direct impact on their own financial lives. It is a clear violation of the right to freedom of expression which, although protected by the Swazi Constitution, appears to be worth little in a country ruled by leaders determined to police the parameters of public debate.

This entry was posted in Freedom of Expression, swaziland. Bookmark the permalink.

Stephen Donaghy says:  28 AUGUST, 2014 AT 10:12 AM  There is no evidence that the Swazi Government is taking the AGOA threat seriously. It has been invited to undertake legal and political reforms before as a precondition for eligibility to access funds and markets and has has refused. The South African Loan, The Millennium Challenge Corporation, The African Development Bank and IMF’s Letter of Comfort have all been refused because of conditions similar to AGOA. The actions of the police, the judiciary and the executive arms of government are utterly consistent with making no effort and preparing to lay the blame on the Unions whose only crime was to tell the truth.

This Guidebook provides information about how healthcare users in Africa can enforce their human right to health by making use of complaint processes, particularly for people who are disproportionately vulnerable…