Holding police accountable for their systematic abuse of sex workers 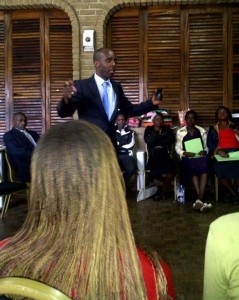 Victor Mhango at a workshop in Blantyre on 13 June 2013

It is common knowledge that the criminalisation of activities related to sex work places sex workers at risk of abuse from the police. This is also the case in Malawi, where studies on sex work have highlighted the abuse sex workers face at the hands of the police.

Various organisations in Malawi promote the rights of sex workers and discourage police abuse – these include Theatre for a Change (TFAC), Pakachere and the Centre for the Development of People (CEDEP).  In November 2012, a National Female Sex Workers Alliance was formed to empower sex workers to organise and stand up for their rights.  These organisations are developing creative responses to the problem of police abuse, including working with police officers to incubate a human rights-based response to sex workers within the Malawi Police Service.  In addition the organisations have invested significant time in conducting research to understand the needs of sex workers, and in developing strategies which would improve access to health and HIV prevention services for sex workers.

On 13 and 14 June 2013 the Centre for Human Rights Education, Advice and Assistance (CHREAA) introduced their toll-free line to sex workers, police and magistrates in Blantyre, Malawi. The toll-free line provides a tool for sex workers to report cases of police abuse and to acquire the services of a paralegal if they have been arrested. The workshop was facilitated by Victor Mhango, the Director of CHREAA, and Clifford Msiska, the Director of the Paralegal Advisory Services Institute (PASI). PASI is renowned in Africa for having developed a sustainable approach to the provision of legal services to persons who have been arrested. The organisation provides paralegal services to arrested persons throughout Malawi. CHREAA, as an implementing partner of PASI’s paralegal programme, focuses specifically on providing paralegal support to facilitate the speedy release of women and children and to reduce prison overcrowding.  It is accordingly an exciting development when mainstream organisations are willing to extend their services to more marginalised groups such as sex workers. That is exactly the point of working on human rights, to include in one’s work the rights of marginalised and difficult to reach groups in society.

One of the concerns raised in the CHREAA workshop in Blantyre was that sex workers are often arrested unlawfully by police using the rogue and vagabond provisions in the Penal Code. The offences dealing with rogue and vagabond persons are often applied incorrectly in circumstances where there is no indication of an illegal activity having taken place. The exchange of sex for money is not specifically prohibited in Malawi and it is only activities related to the exploitation of sex workers, such as procurement, brothel keeping and living off the earnings of prostitution which are prohibited.

In addition, sex workers are often arrested in a manner which violates the requirements and procedures for an arrest as outlined in the Constitution and Criminal Procedure and Evidence Code.  In many cases police solicit money from sex workers in exchange for not being arrested or to facilitate their release. Such practices have become so entrenched within the police force that people often do not see the problem with it. Police often feel entitled to do so because they believe sex work to be immoral and illegal. Police might also feel the need to continue soliciting money from sex workers because their salaries are completely insufficient to meet the costs of living. This makes finding solutions to the problem of police abuse of sex workers all the more difficult.

Nevertheless, if an answer is to be found to the worldwide problem of police abusing sex workers, the answer is likely to come from Malawi, where the country has the benefit of a committed sex worker leadership, creative and passionate organisations and NGO leadership, police and magistrates who are willing to acknowledge the problems, and a more accommodating public discourse on sex worker rights.

On 9 July 2013, SALC and CHREAA will launch its research report on the interpretation and implementation of the offences relating to idle and disorderly persons and rogues and vagabonds in Malawi. More information will be made available on this site and on CHREAA’s website.