SALC in the news – AU, ICC leaders must find consensus on Kenya warrants 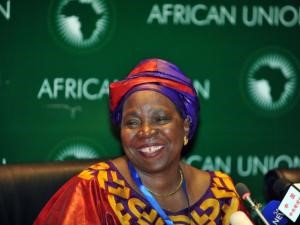 SPARE a thought for African Union (AU) chairwoman Nkosazana Dlamini-Zuma and International Criminal Court (ICC) prosecutor Fatou Bensouda. Each has been tasked with providing leadership to prominent, if vulnerable, international bodies and will be judged on their records of leading their respective institutions to robust health.

They are tasked at a time when female global leadership remains a rare phenomenon and African female leadership at the global level is rarer still.

Ironically, each of them faces the risk of sabotage by the macho grandstanding of her peers.

Take Bensouda. She is having to manage a docket of cases shaped, it often seems, by her predecessor Luis Moreno Ocampo’s desire to be a Hollywood-style hero — revered by hapless victims, reviled by murderous tyrants; unperturbed that the law often takes more nuanced turns.

Bensouda must now contend with the fallout. Last week, judges at the ICC said prosecutors must better provide stronger evidence against former Côte d’Ivoire president Laurent Gbagbo if the case against him is to proceed.

This follows the ICC’s acquittal late last year, of Congolese warlord Mathieu Ngudjolo Chui on the basis of an insufficiently solid case and the decision, this March, of Bensouda’s own office to withdraw evidence against a Kenyan accused for lack of evidence.

These developments hardly do justice to an institution charged with handling cases of the world’s worst crimes.

Over at the AU, Dlamini-Zuma is not having any easier a time. African heads of state, indignant at an unresponsive United Nations Security Council and swelled with bravado at the “Ascendant Africa” refrain, left the likes of French President Francois Hollande to address empty conference venues and US Secretary of State John Kerry to have to cancel his address at the recent AU summit celebrating the 50th anniversary of its earlier incarnation, the Organisation of African Unity.

Also at the summit, there was the now standard gauntlet throw-down with the ICC — the issuing of an official communique calling for an end to the ICC’s indictments of recently elected Kenyan President Uhuru Kenyatta and his deputy, William Ruto.

As things stand, both institutions are likely to emerge from the Kenyan indictment saga weakened — shown only to be ineffective, blustery bodies.

In publicly calling for the removal of the indictments, the AU offers the ICC no space to flinch.

To capitulate would destroy the ICC’s independence, revealing it to be craven and easy prey for bullies. The only response the AU’s call thus invites is a non-response.

Still, it is hard to imagine how the indictments can proceed. At present, Kenyatta and Ruto have indicated that they will co-operate with the ICC.

But that co-operation, if indictments persist, is sure to run out.

In that event, no country — not just the club of African states — will surrender Kenyatta or Ruto to the ICC, so thwarting any realistic prospect of prosecution.

Countries would fear being seen to thumb their noses at the Kenyans who, in spite of the indictments, democratically elected Kenyatta and Ruto to office.

The ICC would be left only to huff and puff on the side lines, shown to be empty of any real power.

So how to go forward?

Liberated from all this brawny posturing, Bensouda and Dlamini-Zuma might retire to a meeting room, far from the public and their peers’ glare, and candidly disclose the impossibilities of their respective institutional positions.

Dlamini-Zuma might offer a less combative, confrontational engagement going forward and Bensouda might indicate that her office is considering withdrawing charges against the Kenyan statesmen for the time being.

For a multitude of reasons, not least the obligations owed by both institutions to the victims of mass violence, this would be a very far from perfect agreement.

But for the long-term sustainability and ultimately the reputation and legitimacy of both institutions, some form of workable consensus will have to be negotiated — and that will only happen far from the grandstanding hotheads.