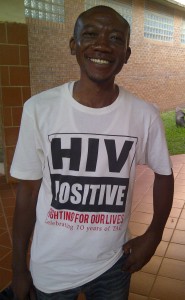 SALC IN THE NEWS: PAUL KASONKOMONA FIGHTS FOR FAIR TRIAL

Paul Kasonkomona, an HIV/Aids activist based in Zambia, appeared in the Lusaka Magistrate’s Court today (15 May) on charges of idle and disorderly behaviour. He was arrested last month after calling on the Zambian government to decriminalise homosexuality and to respect the human rights of gay people, prisoners, and sex workers. Kasonkomona’s case was postponed today after his defence attorneys, SBN Legal Practitioners, filed a constitutional application on two grounds.

The first is that the charges against him violated his constitutional right to freedom of expression. The second is that he is not guaranteed a fair trial, as safeguarded in the Zambian constitution, because the prosecution has not provided the defence with witness statements and other evidence that they intend to submit.

GroundUp spoke to lawyers from the Southern African Litigation Centre (SALC), who are providing legal support to Kasonkomona’s Zambian lawyers, for updates about the case. Under Zambian law it is illegal for lawyers to comment on cases currently before the court.

According to SALC’s Anneke Meerkotter, Kasonkomona’s actions – calling on the Zambian government on live television to respect gay rights – neither amounts to idle and disorderly behaviour, nor soliciting for immoral behaviour in a public place. According to an article posted on the SALC website, the charges against Kasonkomona suggest that his “arrest had been for an ulterior purpose [that is] not based in law.”

On 10 April, Kasonkomona launched a case to sue the Attorney General for punitive damages for false imprisonment, mental stress and damages. He is also claiming damages from the police for denying him access to his ARV and TB medication for two days while he was in prison waiting for charges to be laid against him.

Kasonkomona’s arrest comes after media reports about the State’s violations of the rights of gay people. The Zambian penal code already criminalises homosexual acts between consenting adults, but government officials, the police, and traditional leaders have renewed calls for restrictions on gay rights.

Guardian News and Media recently quoted Guy Scott, the Zambian vice-president, as saying that it would be “self-indulgent” to talk about gay rights considering the other challenges facing the country. Chief Madzimawe of the Ngoni was quoted in the Zambia Daily Mail as saying that homosexuality is against African culture and that “gay people should be caged”.

Zambia is a deeply conservative and religious country. Evangelical missionaries had a profound influence on Zambian society, and gay rights groups argue that this has shaped current views on homosexuality.

The Zambian government has been criticised in the international media for its human rights violations, particularly with regards to sexual minorities. Many gay people cannot effectively use the country’s justice system because of intolerance of homosexuality on the part of government and police officials.

The Zambian High Commissioner to South Africa, Mr Chikond Muyeba, said that he cannot comment as he does not have details about the case. However, the government has issued statements on this matter and he is sure that the due process of the law will take place. “The Zambian Constitution is very clear on the matter,” he says.

According to a report by Global Rights, Zambia’s criminalisation of homosexuality not only reinforces a climate of stigma but also violates the provisions of the International Covenant on Civil and Political Rights, which Zambia is party to. This is also despite the protections within the Zambian constitution against human rights violations and discrimination.

Like other former British colonies, Zambia outlaws “unnatural offences” such as homosexuality. Zambia’s penal code, which it inherited from British colonial law, remained largely unchanged since the country gained independence in 1964. However, it was amended in 2005 to strengthen provisions against same-sex sexual acts.

The Mail and Guardian reported on 7 May 2013 that a gay couple was arrested in Northern Zambia, after relatives reported them to the police. The two men, James Mwape (20) and Philip Mubiana (21), are charged with the offence of “sodomy or having sex against the order of nature contrary to the laws of Zambia”.

According to the 2010 US State Department’s Human Rights Report, organisations that promote gay rights are not legally allowed to register with the Registrar of Societies or to openly hold protest marches in Zambia. The head of public relations for the Zambian Minister of Home Affairs was recently quoted as stating that non-governmental organisations that promote gay rights in Zambia will risk being deregistered and having their staff arrested.