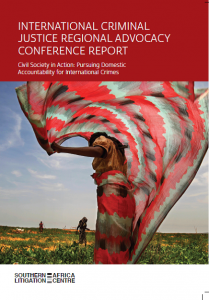 There are few more controversial topics in Africa at the moment than the continent’s relationship with the International Criminal Court – as exemplified by the contrasting reactions to the election of Uhuru Kenyatta, who has been indicted by the ICC, as President of Kenya.

So the release of a new report by the Southern Africa Litigation Centre (SALC) on international criminal law could not have been more timely.

Focusing on the role and potential of African civil society to secure principled support for international criminal law in Africa, at a time when the relationship between Africa and the international criminal justice project appears to be so fractious, Positive Reinforcement demonstrates that a number of positive advancements and developments on the continent in this area can be attributed to African civil society.

In particular, the report focuses on the critical issue of complementarity.

Only if that state is unwilling or unable to genuinely carry out investigations and prosecutions is the ICC authorised to intervene. It is this – the principle of complementarity – that is the real hallmark of international criminal justice today.

That complementarity is meaningfully realised requires not only that states ratify the Rome Statute, but that they implement domestic legislation, and that they appoint and apportion sufficient resources to people and bodies, who have the requisite expertise, tasked with the specialised functions of conducting domestic investigations and prosecutions.

That these steps happen, and once put in place, that they aren’t merely for show but are properly used, requires political will.

Civil society’s efforts are absolutely crucial to securing that political will.

The objective of the report is to inspire other civil society actors to more forcefully enter this field, by showing how they might induce their governments – through engagement and advocacy, and sometimes through litigation – to meet the obligations of complementarity.

The fact is that Africa has made a substantial intellectual investment in the international criminal justice project: vocal during the Rome Statute negotiations, the Africa bloc was critical in fending off interventions that would have resulted in a less independent court.