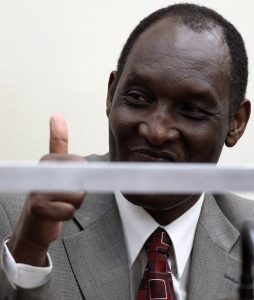 Lt Gen Faustin Nyamwasa during a recent court appearance in Johannessburg in the case of those who tried to kill him.

Two human rights groups have asked a South African court to revoke the refugee status of former Rwanda army chief Faustin Kayumba Nyamwasa. The Consortium for Refugees and Migrant Rights in South Africa CoRMSA), supported by the Southern Africa Litigation Centre, have asked the High Court in Gauteng province to strip Lt Gen Nyamwasa of his refugee status. South Africa’s immigration authorities granted Gen Nyamwasa refugee status in June 2010 “despite the existence of substantial and credible allegations linking him to war crimes and crimes against humanity in both Rwanda and the Democratic Republic of Congo”, the rights groups said in a statement. “Refugee law is intended to protect the persecuted – not the persecutor.”

Anton Katz SC, appearing for the applicant, argued Nyamwasa should never have been considered for refugee status because he was suspected of war crimes.  He argued that Section 4 of the Refugees Act, in accordance with international practice, excludes persons who are reasonably believed to have committed a crime against peace, a war crime, or a crime against humanity, from applying for refugee status.  CoRMSA only learnt of Nyamwasa’s presence in the country when he became the victim of an assassination attempt in Johannesburg in June 2010. Nyamwasa blamed his former ally, Rwandan president Paul Kagame, for orchestrating the attack. He and his family were granted refugee status shortly after the attack.  South African authorities have refused an application for Nyamwasa’s extradition to Rwanda, where he was last year sentenced in absentia to a lengthy prison term for his alleged involvement in a series of grenade attacks in the country’s capital Kigali.

According to CoRMSA, a French judge issued an arrest warrant for Nyamwasa in 2006 for involvement in orchestrating the shooting down of an aircraft carrying former Rwandan president Juvenal Habyarimana. Two years later a Spanish judge indicted Nyamwasa for war crimes, and earlier this year asked for help from South African authorities to interview him. The indictment implicated Nyamwasa in the killings of civilians in Rwanda and the DRC, and maintained he had been responsible for the massacre of 2500 Hutu refugees and the murder of four Spanish nationals. South African authorities contended the evidence was not sufficient to conclude there was reason to believe Nyamwasa might have been involved in international crimes.

Katz said the applicant did not want Nyamwasa to go back to Rwanda because of the political climate in that country. “We agree that he can’t be sent back to Rwanda, but that does not concern this court. This court must decide if he’s entitled to refugee status. “If the decision was irrational this court must set it aside. He (Nyamwasa) may find himself having to apply for another type of permit.” Katz said it would appear Nyamwasa had applied for and was granted refugee status within a day, which was unheard of in South Africa. He argued that refugee laws provided for the protection of the vulnerable and persecuted, not for those who perpetrated atrocities.  “The facts demonstrate an absolute failure on the part of the respondents to understand what they were doing.” He argued the decision to grant Nyamwasa refugee status was irrational, unlawful and unconstitutional and should be set aside.