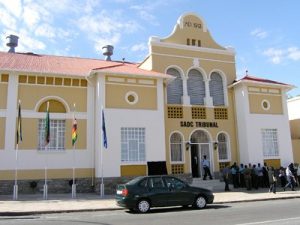 The 2008 ruling that Zimbabwe’s land grab campaign was unlawful is still binding, despite attempts both in and outside Zimbabwe to undermine the regional human rights court.

This is according to top legal groups in Southern Africa, who are campaigning for the human rights mandate of the SADC Tribunal to be upheld. The Southern African Litigation Centre (SALC), the International Commission of Jurists and the SADC Lawyers Association are urging regional leaders to reinstate the Tribunal with its full human rights mandate, when the leaders meet for the upcoming SADC summit in Maputo next week.

The Tribunal has been suspended for over a year as a result of its landmark ruling against the Robert Mugabe regime which stated that the land grab was unlawful because it was ‘inherently discriminatory’. The then ZANU PF government refused to honour the court’s orders to compensate farmers who lost land in the land grab and also ignored the order to protect the remaining farmers from further threat.

SADC leaders then appeared to demonstrate loyalty to one of their own by suspending the court instead of taking action against the Zim government, despite the country violating its commitments to the SADC Treaty by snubbing the Tribunal.

The court’s fate is now set to be decided at the upcoming SADC summit. But there is serious concern that the jurisdiction and core mandate of the Tribunal will be hobbled, as part of its potential revival.

Nicole Fritz, the executive director of the SALC, told SW Radio Africa on Wednesday that preliminary documents drafted by SADC Justice Ministers “propose that the Tribunal be divested of its human rights jurisdiction.” This is despite SADC not yet adopting a human rights protocol that is independent of the Tribunal.

“This is a worrying and disturbing feature that will be a big blow and setback for the protection of human rights and rule of law in Southern Africa,” Fritz warned.

She continued: “Plans by SADC to remove the Tribunal’s human rights mandate, pending the adoption of a human rights protocol, are ill-advised. If such a proposal is adopted by the SADC leaders in Maputo, the rights of citizens to obtain justice and protection of rights will be violated.”

The threat to the authority and jurisdiction of the Tribunal has also intensified since the release of Zimbabwe’s draft constitution, which contains specific clauses and wording to undermine the regional court.

The controversial land clauses in the draft undermine the 2008 Tribunal ruling by stating that the government is not responsible for compensation of land ‘acquired’ by the state. The draft goes on to specifically state that no compensation challenge can be made on the basis of ‘discrimination’, while the future takeover of land cannot be challenged at all.

SALC’s Fritz told SW Radio Africa that despite these threats to the future of the SADC Tribunal, the rulings it has made before it was suspended are still binding.

“The proposed amendments to the SADC Tribunal protocol cannot undo its previous rulings. So whatever changes are to come, the rulings still stand. However, it does mean no one else will ever be able to make these kind of challenges in the court again,” Fritz said.