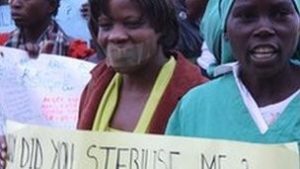 A Namibian high court judge is to rule on whether three HIV-positive women were sterilised without their informed consent.

The case is being brought by three pregnant women who opted to have Caesarean deliveries to reduce the risk of passing Aids to their babies.

Health officials have denied that the women were forcibly sterilised.

The women’s lawyers say similar cases have been reported in other countries in the region.

If the judge rules in their favour, it may pave the way for compensation.

The women’s lawyers say their clients were told by doctors in Namibia that they would only be eligible for surgery if they agreed to be sterilised at the same time.

The lawyers say coerced consent does not amount to informed consent and that therefore the Namibian authorities violated the women’s human rights.

The health ministry denies that it issued a directive for HIV-positive women to be sterilised and said it was unaware of anyone being sterilised without their consent.

Nicole Fritz, from the Southern Africa Litigation Centre which brought the case, told the BBC the women had been in pain and unclear about what was going to happen:

“One of the women had been in labour for four days, was in excruciating pain. Others among the women didn’t know exactly what they were consenting to. They thought that this was part of the Caesarean procedure.

“So to the extent that they can be said to have consented, they did not understand what it was, what the procedure was that they were consenting to – they had no informed consent.”

Lawyers say they have evidence that HIV-positive women are being forced to undergo sterilisation in Swaziland and parts of South Africa, which they say is an infringement of the women’s constitutional rights.

About 13% of adults in Nambia are HIV-positive, according to UNAids.