Nkosazana Dlamini-Zuma has won a tightly contested vote to become the new head of the African Union Commission – the first woman to hold the post. 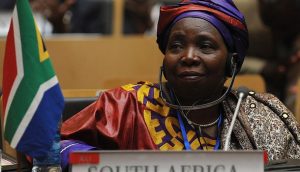 South African Home Affairs Minister Nkosazana Dlamini-Zuma was elected on Sunday to become the first female head of the African Union (AU) Commission, ending a bruising leadership battle that had threatened to divide and weaken the organisation.

Cheers broke out at the AU’s soaring, Chinese-built steel and glass headquarters in the Ethiopian capital Addis Ababa as supporters of President Jacob Zuma’s ex-wife celebrated her victory over incumbent Jean Ping of Gabon.

“We made it!” a grinning Zimbabwean delegate shouted, reflecting the strong support Dlamini-Zuma’s candidacy had received from fellow members of the Southern African Development Community (SADC). Ping, who had served in the AU post since 2008, was largely supported by French-speaking African states.

The 63-year-old’s appointment, who previously served as minister of health and foreign affairs, will add to the global diplomatic clout of an African state which is already the continent’s largest economy.

As head of the organisation’s executive arm, she faces immediate challenges as the AU tries to gain UN Security Council backing for a military intervention in northern Mali, where local and foreign al-Qaeda-linked jihadists seized control after a destabilising coup in the southern capital Bamako.

The Mali crisis, along with an army putsch in Guinea-Bissau and border clashes in April between Sudan and South Sudan have blotted Africa’s advances in recent years towards better governance and stability, accompanied by buoyant growth.

Deadlocked
Dlamini-Zuma had to undergo three voting rounds before Ping (69) was eliminated. A final confidence vote of 37 in favour gave her the 60% majority she needed to be elected.

The contest to head the commission of the 54-member AU had been deadlocked since a previous vote at a January summit ended in stalemate. The impasse had persisted through a summit of AU heads of state held in Addis Ababa at the weekend.

It prompted the AU’s rotating chairperson, Benin President Boni Yayi, to warn African heads of state that failure by the continental body to resolve the leadership deadlock would divide it and undermine its credibility in the world.

“Now we move on to unite the African continent, we unite everybody through Madame Zuma,” Lindiwe Zulu, Zuma’s advisor on international affairs, told reporters.

“She won, I congratulate her,” Ping said as he left the AU headquarters among a small crowd of well-wishers.

Analysts said the prospect of a further six months of indecision over the AU commission post appeared to have swayed member states to finally make a choice.

Taking the lead
“Now we have clarity. It means that the other nine commissioners can be elected and the AU, which has been under a lame duck management recently because of the lack of clarity, has a clear direction and can deal with the real issues,” said Jakkie Cilliers, executive director of the South Africa-based Institute of Security Studies’ Pretoria office.

Smith said Dlamini-Zuma would have to first move to reconcile with the Francophone bloc which supported rival Ping.

This also raised the question of how she would handle the proposed military intervention to reunite divided Mali, an initiative led up to now by the mostly French-speaking West African regional grouping Ecowas, many of whose members had supported Ping’s candidacy.

Critics say the AU showed itself hesitant in its response to the conflicts last year in Libya and Côte d’Ivoire, allowing Western governments to take lead roles.

At a news conference earlier in the day before the vote, Dlamini-Zuma sought to dispel fears that South Africa might seek to use the AU post to try to dominate the continent.

Some smaller countries had argued that her candidacy broke an unwritten rule that Africa’s dominant states should not contest the AU leadership.

Instability
During the summit itself, attendees agreed on a call for the resignation of the military junta in Mali.

In addition, the summit saw progress on the conflict between Sudan and its year-old southern neighbour South Sudan.

Members also agreed on a common position on the conflict in the DRC, calling for new international peacekeepers to be deployed against the rebel militias in the east.

Mali has suffered double-pronged instability since March, when rebel soldiers overthrew the government in Bamako in a military coup. Islamist rebels in the north exploited the instability to declare themselves an autonomous state.

The formation of a national unity government in Mali was called for by African leaders to help improve the security crisis caused by rebels and armed groups in the north. The new government would be formed before the end of July.

“It is hoped that the formation of the government will mark the return of state authority to Mali,” the AU’s peace and security commissioner Ramtane Lamamra said.

The proliferation of armed groups has uprooted nearly 320 000 people, with many of them fleeing to neighbouring countries.

The armed groups constitute a “serious threat to regional and international peace and security,” added Lamamra.

Individuals and sponsors responsible for impeding the transitional process in Mali will be hit with sanctions.

A national unity government in Mali would bring the whole country back under a single leadership and organise fair and transparent presidential elections by the end of the transitional period.

On the topic of DRC, 11 countries from eastern and central Africa called for new peacekeeping forces to be sent.

Feuds
Protests outside the venue in the Ethiopian capital have seen 72 arrests, and some 200 injured. Those arrested, according to police, were Islamists demonstrating against perceived liberal implementation of religious laws.

Earlier, on Saturday, the presidents of feuding South Sudan and Sudan expressed a determination to settle their dispute over territory and oil – after meeting for the first time in six months on the sidelines of the summit.

“They have agreed in principle on all issues,” said Pagan Aman, South Sudan’s chief negotiator.

The two countries are currently involved in peace talks in Bahir Dar, Ethiopia, under the supervision of AU mediators. The two sides are expected to negotiate until August 2.

AU-led negotiations between the two countries have been continuing since the oil rich south gained independence from the north a year ago.

The two sides have so far been unable to reach an agreement on oil transit fees, the status of citizens, border demarcation and the final status of the disputed Abyei territory.

The South has 75% of the region’s oil but Juba still depends on the North’s pipeline and its Red Sea port to export its crude.

Addressing the disagreement over oil transit fees, Pagan insisted that the two states would reach a solution that is “fair and based on international practice”. – Sapa, dpa, Reuters