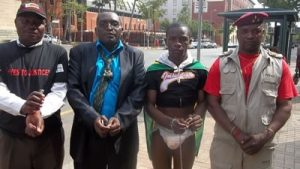 A number of Zimbabwean torture victims joined scores of exiled nationals in South Africa this week, calling for justice for the hardships they faced back home.

The group has been protesting outside the Pretoria High Court where a landmark legal challenge is being heard. The case is urging South African authorities to investigate and prosecute high level Zimbabwean officials accused of crimes against humanity, as part of their international legal obligations.

The case was filed by the Southern African Litigation Centre (SALC) and the Zimbabwe Exiles Forum and is based on a decision by South Africa’s National Prosecuting Authority (NPA) and the police not to investigate the torture of MDC members in 2007.

These details were contained in a dossier submitted by SALC and the Exiles Forum to the NPA and the police in 2008. This week’s court challenge will urge this investigation to happen, because South Africa is a signatory to the International Criminal Court (ICC). 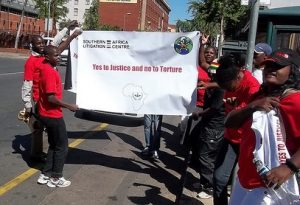 Yes to justice and No to torture

Torture survivors and other exiled Zimbabweans meanwhile have for the past three days gathered to show their support for the case, wearing t-shirts with the slogan: ‘Yes to justice and No to torture’. Some members of the group wore shackles on their ankles and handcuffs on their wrists, while others wore tape over their mouths.

Gabriel Shumba, the head of the Exiles Forum and a man who is also a torture survivor, joined the protesters this week. He told SW Radio Africa that he was very moved by the reaction.

“People were singing and dancing and chanting against the impunity in Zimbabwe. It was a signal moment for me and I really hope that South Africa will heed the calls for justice,” Shumba said.

The case continued Wednesday with more arguments from the NPA and police over its decision not to investigate. The lawyer representing the police even went so far as to argue that if the case is successful, it would be an exercise in futility.

Lawyers representing SALC and the Exiles Forum then argued that the NPA and the police had relegated the matter to one of ‘unimportance’ and did not act as a responsible signatory to the ICC.

The judge presiding over the matter was also critical of the state’s arguments that its political considerations outweigh its legal obligations, stating that he would “lift up his hands in horror” if crimes against humanity go unpunished because states care more for their political relations.

The case will continue on Thursday.