SALC IN THE NEWS: INTERNATIONAL SHOCK AT JUDGE’S DISMISSAL

Home » SALC IN THE NEWS: INTERNATIONAL SHOCK AT JUDGE’S DISMISSAL 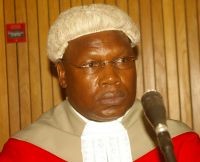 The formations say this action speaks of clear contempt for the rule of law and is a debasement of Swaziland’s system of governance. The associations are the International Commission of Jurists (ICJ), the Southern Africa Development Community Lawyers Association (SADC LA) and the Southern Africa Litigation Centre (SALC).

They issued a joint statement over this matter on Friday, September 30, 2011. They further condemned the suspension of the Minister of Justice David Matse.

Matse was reportedly suspended after he refused to sign a letter that was to be served on Judge Masuku, dismissing him.

The shocked organisations say Judge Masuku has been dismissed for no offence, save that of earning Chief Justice Michael Ramodibedi’s personal enmity.

“Further, the Minister of Justice was also sacrificed for his principles after he refused to be party to the moves of injustice,” they say in the statement.

“Judge Masuku’s dismissal follows a clearly tainted disciplinary hearing. The initial 12 charges of misconduct put to Judge Masuku were so vague and unsubstantiated as to create the impression that they were spurious.

“As it transpired, several of the charges were abandoned at the disciplinary hearing.”

The associations also feel that the disciplinary hearing itself was not conducted in compliance with fundamental principles of justice and fairness. They cited the Chief Justice’s refusal to recuse himself from it, notwithstanding the fact that he acted both as accuser and judge as a clear example of this.

“The application for the hearing to be held in public was also denied and the opportunity to cross-examine deponents to the affidavits attesting to Judge Masuku’s alleged misconduct was also refused,” reads the sta-tement.

The lawyers said there were no reasons advanced for these decisions. “These recent events are likely only to further inflame Swaziland’s judicial crisis,” said the lawyers.

Last week, members of the Law Society of Swaziland took to the streets, marching through Mbabane, to highlight their frustration at the Judicial Service Commission’s unwillingness to receive their complaints against Ramodibedi.

The march followed an instruction by the Chief Justice to magistrate courts to proceed with criminal cases despite the lawyers’ current boycott which has resulted in the conviction of unrepresented accused.

They said this had proved not only practically unworkable but has also allowed for the perception of bad faith in case allocation.

“The most controversial of the directives determined that no summons may be issued against the King’s office, flying in the face of long-established precedent and leaving several parties, including those who have engaged in commercial transactions with the King’s office without remedy,” reads the joint statement.

Meanwhile, Lawyers for Human Rights (LHR) says in Swaziland there is no rule of law and what is happening in the country’s Judiciary is not new.

On behalf of the organisation, Mandla Mkhwanazi said what happened to Judge Masuku was a violation of his rights.

“From a point of view of human rights, fundamental freedoms and civil liberties, the drafters of the Universal Declaration of Human Rights (UNDHR) put it very well that human rights should be protected by the rule of law,” reads a statement from the organisation.

Mkhwanazi said in essence, Swaziland needed leaders who would understand that the basis of good governance was the rule of law.