SALC in the news: Zuma continues to sit on army general’s report on violence

Home » SALC in the news: Zuma continues to sit on army general’s report on violence 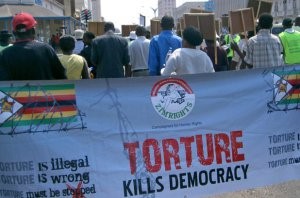 In 2008 former South African President Thabo Mbeki commissioned a fact finding mission into state sponsored violence that took place in the run up to Zimbabwe’s one man presidential run-off. Mbeki, as mediator, sent six retired South African army generals on two fact-finding missions to investigate the cause of the political crisis, especially the role of the army in the violence. Nearly two years since those generals reported back to Mbeki, their damning report has still not been made public.

The saga surrounding the reluctance of not only Mbeki but his successor, Jacob Zuma, to make the report public might have taken a back seat but NGO’s in South Africa have not given up the fight. Last year in June the South African History Archive (SAHA) took steps to force Zuma’s office to release the report, under the terms of the Promotion of Access to Information Act. They disputed Zuma’s claim that the report does not exist in hard copy and that the generals merely gave a ‘once-off oral briefing to the President.’

The South African Litigation Centre, Southern African Centre for Survivors of Torture and SAHA all teamed up to try and get the report. In August 2009 they took their campaign to the SADC Heads of State meeting held in Kinshasa, demanding that regional leaders use the summit to force South Africa to release the report. The Zimbabwe Lawyers for Human Rights also backed the campaign saying it was disturbing that the South African presidency was refusing to make public such an important document.

It is believed the six generals who went into Zimbabwe produced a damning report on the violence and the South African government is desperate to suppress it. With R650 000 of tax payers money spent on the missions its highly unlikely no report was produced, as was claimed. Newsreel spoke to Nicole Fritz, the Executive Director of the South African Litigation Centre and she told us they had testimonies from people interviewed by the generals in Zimbabwe and who confirmed that they took notes and collected documents as they interviewed people during their mission.

After exhausting all internal government appeals the NGO’s asked the Pretoria High Court to force the government to release the report. The court is being asked to review the refusals by the Presidency to release the documents. Fritz told us lawyers are still preparing arguments and exchanging papers and the matter could be heard in court within the next 6 weeks. Should the Presidents Office continue with their argument that there is no report, the NGO’s will argue that all government correspondence pertaining to the issue be made public. Zuma has already said no to this.